ABANCA & CÉSAR CERNUDA, VICEPRESIDENT OF MICROSOFT, ARE AWARDED WITH THE PONCE DE LEÓN AWARD BY THE SPAIN-US CHAMBER OF COMMERCE IN MIAMI.

In a heartwarming gala held this Friday, November 15th at the Biltmore Hotel in Coral Gables, Miami, with more than 340 guests, the Spain-US Chamber of Commerce celebrated, the awarding of its prestigious Ponce de León awards. On this occasion and coinciding with its 39th anniversary, the main protagonists of the evening were the financial entity ABANCA and César Cernuda, corporate vice president at Microsoft Corporation and president of Microsoft Latin America, they received from the president of the Spain-US Chamber of Commerce, the Ponce de León award for “Company of the Year” and  “Executive of the Year”, respectively.

Javier Estades Saez, president of the Spain-US Chamber of Commerce and president of Tabacalera USA, recalled that 500 years ago Magallanes-Elcano accomplished the first circumnavigation of the world, showing the curiosity and adventurous spirit that defines Spaniards who throughout these centuries have imprinted a lasting mark on America. The president stated that “History is still alive and we have this example in the winners we are honoring today.” Finally, he stressed that “being part of the network of the Chamber of Commerce of Spain, which has 180 offices in more than 31 countries, makes us an excellent global business development platform and professional network.”

Mónica Vázquez, director of ABANCA in the United States received the award on behalf of Juan Carlos Escotet Rodríguez, president of the financial company, and the CEO, Francisco Botas. Many representatives of the Banesco group also attended the gala. ABANCA is the main bank in the northwest of Spain and it is in the top 10 nationwide; in addition, it has the privilege of having obtained the first international banking license granted by the State of Florida in the last decade.

In her speech, Vázquez explained that, despite the recent arrival of this bank to the United States, ABANCA has “more than 300 years of banking knowledge and tradition based on trust, strength and commitment to our clients”.

The director of the bank in the United States also stated that they have “the support of qualifying agencies, that issued 14 positive actions on ABANCA in 2018 and 2019, from analysts such as Alvarez & Marsal, whom in their last quarterly report, The Pulse of the Spanish banking industry, ranked us as the first financial bank; also in international markets, where our emissions are being well-received”.

On their behalf, César Cernuda, corporate vice president at Microsoft Corporation and president of Microsoft Latin America, received from the president of the chamber Javier Estades, the Ponce de León award for the “2019 Executive of the year” for his professional career and his contribution to accelerate the technological advancement in Latin America. Cernuda was also recently appointed as a global co-sponsor of the Microsoft Women’s Committee -Women @Microsoft-, a role that he considers an honor and an opportunity to continue working to promote the diversity and inclusion of women within the company and in the technological sector: “It’s a great honor for me to receive the Ponce de León award. I want to congratulate the Spain-US Chamber of Commerce for the work they do, which is very much aligned with Microsoft’s mission of empowering every person and organization on the planet to achieve more, something I feel very passionate about and believe is a crucial building block of our future as a society.”

Please, learn more about our most special night in our gallery or in our summary video.

Thank you to all our attendees and supporters, without you this would not be possible. 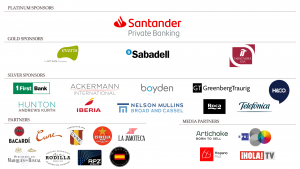